Creative Feel , October 15, 2018
Open a larger version of the following image in a popup:
Share

Poet, artist and philosopher Lefifi Tladi’s insistence that works of art have an intricate idiom that artists themselves often struggle to apprehend seems to embrace John Vusi Mfupi’s body of work. Although Mfupi approaches collage in a manner reminiscent of documentary photography, he is always looking to surprise himself through depicting positive swirls of social life.

Magazines are his chosen medium and scatter meticulously in the corner of his studio in Selby, Johannesburg. The artist’s sacred workspace looks like a shrine where he meditates and improvises with music in the background, because, ‘once I get inside there I start swimming and lose myself in the process.’

Looking at his work, one cannot help but notice an affinity with the collage-cum-plastic paintings of Mbongeni Buthelezi, his former art instructor at Funda Community College in Diepkloof, Soweto. Similar to Buthelezi – whom he credits with instilling in him the values of hard work – Mfupi’s subject matter is generally influenced by what he sees happening around him, albeit with a tinge of nostalgia for his childhood experiences. ‘I don’t normally struggle with the subject matter as I travel with a camera to capture images that speak to me,’ says the artist. 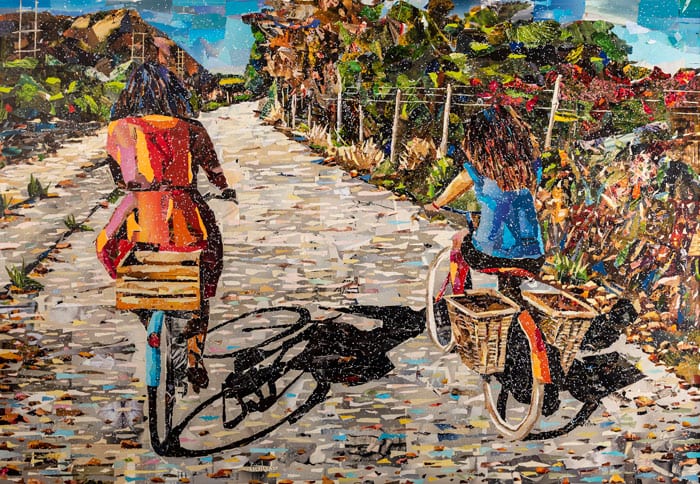 The recorded history of collage as an independent art technique can be attributed to the experiments of Pablo Picasso and Georges Braque during the early part of the 1900s in France. These artists started pasting materials such as ropes, paper and cloth into their compositions to interrupt the illusionistic tendencies of painting and therefore extend the modernist visual language. In contrast, Mfupi adopted collage as his medium of expression in 2005.

Lack of resources motivated him to start experimenting with alternative and non-traditional media and materials – a process which led him to collage. He says the technique pushes him to ‘improvise as you cannot always mix the right colours on a palette as you’ll normally do with painting.’ This inventiveness led to him unearthing the bright blotches that suggest rain in some of his work – Showers of Wealth and Spring Has Sprung.

Although the collages lack any particular line work, the inclined quality of drawing is in the detailing of torn paper strips. Mfupi’s aptitude and competency for drawing the human figure measures up to fellow South African contemporary artists such as Sizwe Khoza, Phillemon Hlungwani, Lionel Smit, Nelson Makamo, Mbongeni Buthelezi and Bambo Sibiya.